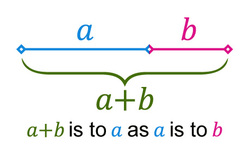 Euclid, the famous Greek mathematician and father of Geometry, described the Golden Ratio in this manner: having a line segment with endpoints A and B; divide it at a point C so that AC/BC = AB/AC. This gives an equation that has unique algebraic properties (Livio, 2002). To find what makes the equation unique, one must explore the numerical value that is calculated from it. In order to do so, let us take the shorter portion (BC) and assign a measure of 1 unit as its length. Let us give the longer portion (AC) a length of x. Using Euclid’s the definition of AC/BC = AB/AC, we will substitute the lengths accordingly to get . By using the basic algebraic technique of cross multiplying the equation becomes x2=x+1, which is a simple quadratic equation. Further use of algebra by subtracting x+1from both sides results in the quadratic equation x2-x-1=0.  As such, using the quadratic formula leads to two solutions: 1.6180339887… and -0.6180339887...The positive value is the numerical value for the Golden Ratio (Livio, 2002). This value is commonly called the Greek letter “Phi”. The second, negative value; therefore, it is not as useful, but is related to Phi (lengths cannot be negative).
Entering the numerical value for the Golden Ratio in a calculator gives a couple of interesting results. If the number is entered and then squared (using the x2 key), the result is 2.6180339887…. If the number is entered to find its reciprocal (using the 1/x key), the result is 0.6180339887…. There is something that should be noticed by comparing the values: x = 1.6180339887…, x2 = 2.6180339887…, and 1/x = 0.6180339887… (Livio, 2002). Each of these values is identical after the decimal place; Phi^2 is one more than Phi and Phi is one more than 1/Phi. In other words, Phi^2 = Phi + 1 and 1/Phi = Phi – 1. Phi is the only number in which adding one will yield its square and subtracting one will yield its inverse (Knott, 2011). The inverse of Phi, 1/Phi, is commonly referred to as the “lowercase phi” (Both symbols for Phi and phi are at top of page). Any division of two quantities that results in Phi or phi yields the Golden Ratio. This can be explained by considering the nature of ratios. Take, for instance, the example of having a room with 2 boys and 3 girls. The ratio of boys to girls would be 2/3, or .666666…; however, if we took the ratio of girls to boys it would be 3/2, or 1.5. Although the numerical values are different and are reciprocals of each other, they describe the relationship between the same two quantities; the ordering of the division is the only difference. Therefore, if one orders the division by using BC/AC instead of AC/BC, the result will be phi (.6180339887…) Incidentally, the negative solution that was mentioned earlier is equal to the negative of 1/phi (Livio, 2002).

Another interesting property of Phi is that it can be defined in terms of itself. Remember that subtracting 1 from Phi gives its reciprocal: Phi-1 = 1/Phi. Changing the equation by adding 1 to both sides gives Phi = 1 + 1/Phi. If we substitute the second Phi with its equivalent, 1+1/Phi, we get: Phi = 1 + 1/(1 + 1/Phi). Continually repeating this step begins to look like this:

This type of equation containing a fraction within a fraction repeatedly is called a continued fraction (Burger & Starbird, 2005). This equation converges to Phi, but does so very slowly because the fraction consists of only ones. This quality leads Livio to call Phi “the most irrational among irrational” numbers (2002, p. 85).

Fibonacci
Phi is also related to the Fibonacci sequence of numbers. This sequence of numbers came about as a solution to a problem that Fibonacci posed about fictional rabbits.  The puzzle was to figure out how many pairs of rabbits would be produced in a year if each pair of immortal rabbits produced another pair each month. By writing out the answers to each month the sequence develops as 1, 1, 2, 3, 5, 8, 13, 21, 34, 55, 89, 144, 233, … The pattern that is seen from this list is that the next number in the sequence is achieved by adding the previous two numbers (Bentley, 2008). This sequence is commonly mentioned with the Golden Ratio because taking the ratio of a Fibonacci number and the one before it increasing converges to Phi (Hemenway, 2005). In fact, the larger the numbers become the closer to Phi the ratio is. Phyllotaxis, the distribution or arrangement of plant parts on a stem, and many other appearances of Phi in nature, are a result of the Fibonacci numbers (Adam, 2003). For more information on Phi and the Fibonacci numbers click the middle button below.